Our Veterinary Group is pleased to provide a wide range of veterinary services for animals in Llandeilo, Ammanford and Crosshands.
Your local veterinarian in various locations in Carmarthenshire. Call us today to schedule your pet care appointment. Learn more...

Everyone at our practice is committed to providing you with the very best in pet healthcare. Our veterinary team bring a wealth of experience to the practice and have individually obtained high standards of professional qualification. 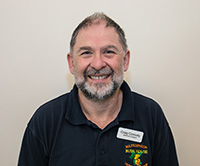 Craig Connolly
Veterinary Partner
BVetMed MRCVS
Craig graduated as a veterinary surgeon from the Royal Veterinary College, University of London, and had worked at Bush House since 1991. Craig mainly works at our Ammanford branch. Craig enjoys taking his dogs Maisie, Ruby and Alfie out for long walks and watching the Formula One. 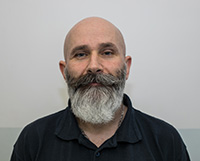 Mark Gordon
Veterinary Partner
BVMS PgCertEmerg(WBIS) PgCertDent(WBIS) MRCVS
Mark graduated as a Veterinary Surgeon from Glasgow University, he has worked at Bush House since 2003. Mark has a certificate in Emergency medicine. He works primarily in our Llandeilo branch. Mark has five cats, although he has his suspicions that Anne-Sofie his wife has more! 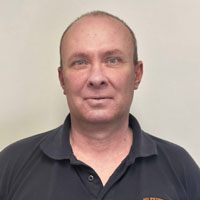 Danail Polendakov
Veterinary Surgeon
MVM MRCVS
Danail graduated as a veterinary surgeon in 1995 from Trakia University. Danail joined our team at Bush House in 2014 after practising veterinary medicine in both Bulgaria and Switzerland. He is multilingual in Bulgarian, English, Russian and some German. Danial lives in Llandeilo with his family and 2 cats, primarily working in our Llandeilo and Cross Hands branches. 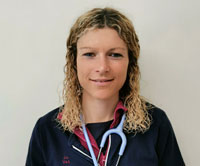 Jo Lloyd Davies
Veterinary Surgeon
BVetMed MRCVS
Jo returned to Bush House in January 2017 and works across the three branches. Originally Jo was part of the team for a few years when she joined as a new graduate in 2008. Jo’s main interest is small animal medicine. Jo enjoys spending time with her husband, young family, dogs and cats.

Sarah Bowen
Veterinary Surgeon
BVetMed MRCVS
Sarah qualified 2010 and worked for Bush House from 2011 until 2015 and returned to Bush House Vets in 2021. 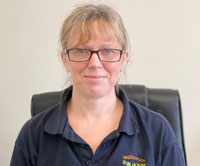 Fran Wynne
Practice Manager
Fran has worked at Bush House since 2011 following a background working in the public sector for many years. Fran overseas management in all branches including Health and Safety and loves the variety of her role including getting to meet many lovely pets and their owners on her travels across the branches. Outside of work Fran enjoys walking Dexter her Jack Russell and spending time with her family, including lots of fun times with her granddaughter. 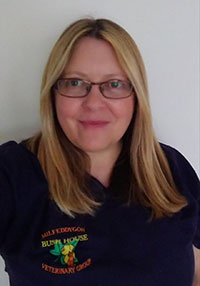 Laura Stewart
Branch Manager - Cross Hands Branch
Laura worked for many years in Veterinary Practices in Hereford and Hay on Wye, but she has recently returned to her home ground of Carmarthenshire. Laura is looking forward to meeting all the Bush House clients and more importantly their wonderful pets. 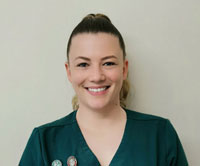 Georgina Dutton
Head RVN
Georgina first came to Bush House for work experience in 2012 whilst studying a foundation degree in Animal Science. Since then Georgina went to the University of Wales Trinity Saint David to study BSc degree in Veterinary Nursing. In 2017 Georgina came back to work Bush House and is based in out Ammanford branch. Georgina has 4 Flat Coated Retrievers and a cat that she re-homed from Bush House called Bundles. 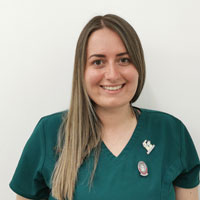 Carwen Davies
RVN - Ammanford Branch
Following on from work experience in 2016, Caz began working for Bush House in January 2017. Caz became qualified as a Registered Veterinary Nurse in 2019. Outside of work Caz lives and works on a farm with many many different animals. Caz also has a dog called Ruby and two cats, Oliver and Todd. Caz is our Pet Diabetes Advisor and is now starting a course in Emergency Critical Care in April 2021. 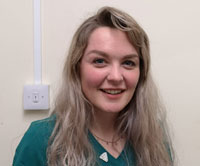 Gwennan Sault-Jones
RVN - Ammanford Branch
Gwen began working with Bush House in 2017. Gwen is newly qualified after passing her last exam in November 2020. Gwen has a dog called Madi and a horse called Tori. She loves to go on fun rides with Tori and Beach walks with Madi. 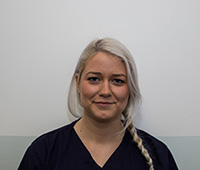 Carly-Jo Dawney
RVN - Llandeilo Branch
CJ first started in practice in 2009 as a nursing assistant, she then joined the Bush House team in 2017. CJ recently qualified in 2020 as a Registered Veterinary Nurse. CJ loves to work with all animals and primarily works in our Llandeilo Branch.

Olivia Jones
SVN - Ammanford/Llandeilo Branch
Olivia has been working at Bush House since December 2017, she started as a receptionist. Olivia is now in her final year of her diploma in veterinary nursing. Olivia works closely with the other Registered Veterinary Nurses and her clinical coach Jo. She lives in Ammanford with her dog Maisie, family and partner. Olivia loves all animals but has a special interest in large animal Wildlife and Zoo sanctuaries. 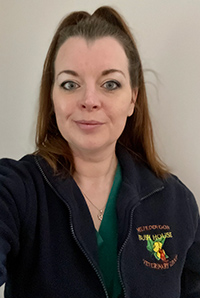 Rachel Phillip
RVN - Llandeilo Branch
I’ve been working in the veterinary field for almost 16 years and became a fully qualified vet nurse 6 years ago. I have a keen interest in small animal dentistry and am a self confessed crazy cat lady, with four cats at home including A tuxedo cat called Korn who I hand reared from three weeks old. 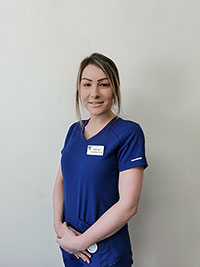 Hannah Squires
Assistant Anaesthetic Nurse - Ammanford Branch
Hannah first started working at Bush House in February 2010. Hannah is currently undertaking a Level 2 Certificate in Assisting Veterinary Surgeons in the Monitoring of Animal Patients under Anaesthesia and Sedation. Hannah loves all aspects of nursing and caring for her patients. Hannah has a love for cats, dogs and horses. 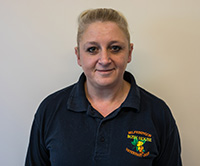 Shan Thomas
Receptionist - Ammanford Branch
Shan works at our Ammanford branch and loves to meet all the animals that come in for appointments. Shan has a particular interest in wildlife and has rehabilitated hedgehogs in the past. Shan has a dog Ziggy, cat called Jasmine, ferret called Frankie and Horse Rio. 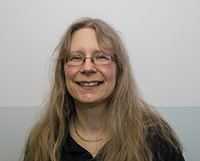 Anne-Sofie Gordon
Administration & Receptionist - Llandeilo Branch
MSc (VetMed)
Anne-Sofie qualified as a veterinary surgeon in 1988 in Sweden at the Uppsala University, however, no longer practices as a vet but joined Bush House as a receptionist in 2017. Anne-Sofie moved to Wales in 1996 after getting married to Mark and settling in Llandeilo with their 3 children. Anne-sofie adores her 6 cats Fia, Ebba, Ester, Lena, Stina and Saga. Five of which were adopted from Bush House, but don't tell Mark as he still thinks she only has 5! 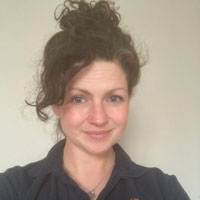 Emma Edwards
Administration & Reception Team - Ammanford Branch
Emma originally worked as a nursing assistant at Bush House Ammanford almost 20 years ago and is back for round two! Emma is based mostly at our Llandeilo branch and enjoys spending any spare time with her children and menagerie of animals 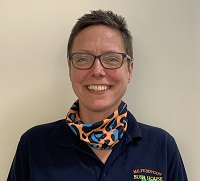 Vicky Edwards
Receptionist - Llandeilo Branch
Vicky has been working in the Llandeilo Branch since April 2021 following a career in the recruitment industry. Vicky prides herself in giving all our clients (and their owners!) a first class service and when she's not working she'll be found with her pets which include: horses, ponies, dogs, cats and chickens. 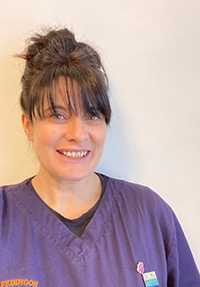 Anna Lewis
Receptionist - Llandeilo and Cross Hands Branch
Anna first started working at our Cross Hands branch in 2012 and after a short time away this year has returned to work as a receptionist in our Llandeilo branch. Anna loves spending time with her family, Alfie her cat and Hugopotamus her dog. 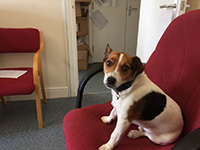 Dexter
Practice Dog
Dexter was born in 2013 and belongs to our practice manager, with the Llandeilo branch being his second home. His favourite hobbies include: chasing balls, receiving fuss (from all the staff who love him!), and eating.

In case of emergencies, click here for more information

How Did We Do?

Our reviews tell the personal experience of an owner who has trusted us with the care of their pet, something we never take for granted.

Out Of Hours Emergencies

Emergencies
We have arrangements in place to provide emergency care …

Our Team
Come and meet our friendly, professional and qualified team …

We have placed a Google Analytics cookie on your device to help improve our service. You can learn about this and how to stop cookies being stored in your browser here. You can also see our Terms & Conditions here. By continuing to use our site, you are accepting these policies.